Please answer the Captcha question to use this search

As automotive remanufacturers, we are making progress. Europe’s End of Life Vehicle Directive means that customers are encouraged to reuse all salvageable materials at the end of the product lifecycle.

A definition completely in line with TRW’s remanufacturing philosophy. And we are passionate about spreading the word.

It’s TRW’s priority to lead the way and to be a voice for the remanufacturing industry. We are working hard with key Associations such as APRA and CLEPA who have a responsibility and key role to play in leading industry change and promoting the issue of automotive remanufacturing with the EU Commission. Testing remanufactured parts

Only components returned in a suitable condition and following our strict returns procedures are suitable for remanufacturing. Parts that are removed by brute force or have been dropped or badly treated upon removal are usually unsuitable for automotive remanufacturing.

TRW is working in conjunction with other well-known names in the automotive remanufacturing industry and industry body CLEPA, to identify the perfect returns solution for your business.

When a part has been returned to TRW in a suitable condition, the deposit value is credited to the garage.

All TRW’s remanufactured automotive products are safety critical – and we take no chances with the safety of any of our parts.

Any core considered for our automotive remanufacturing process must pass a strict selection process – if it doesn’t make the grade, then it isn’t remanufactured. Simple.

And no remanufactured product leaves a factory with the TRW name on it until it has gone through the same gruelling testing schedule as our new OE product.

The very latest technology and software is used in the remanufacturing process for all TRW’s products to test for performance and safety.

We can detect even the smallest of hairline cracks in rebuilt steering racks and vigorously test the strength of our remanufactured calipers.

In the remanufacturing process for rebuilt steering gears, we use the realisation of the Poka-Yoke idea to avoid errors. This means that every examination step needs to be finished successfully before the remanufactured steering gear is released to the next. This method also contributed to Toyota’s worldwide success.

And with all our automotive remanufacturing, a Failure Mode and Effectiveness Analysis (FMEA) is carried out to uncover possible failures and identify improvements at the earliest possible stages.

Pace of technology and development

Due to the development of technology, automotive remanufacturing is at a critical stage today.

There is huge scope for the future of remanufactured electronics and mechatronics – and this is an area where TRW can and will lead the way.

At the top of the technical systems ladder, TRW is in the optimum position to capture this intelligence and transfer it to this element of the market 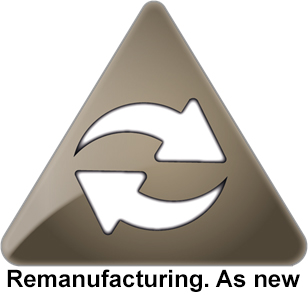 ZF [pro]Tech
ZF [pro]Tech for independent car and commercial vehicle workshops. The ZF workshop concept for enthusiasts – a direct line from you to the specialists.
Find out more

ZF [pro]Points
Earn Points whenever you purchase a product across all ZF brands and turn the Points into amazing rewards.
Find out more

HSDS
On this page you can find the up-to-date TRW Health and Safety Data Sheets.
Find out more

Corner Module
Braking, steering and suspension – each a balanced part of the braking dynamic.
Find out more